That’s about the extent of my stamina. When the duck and I lived in Tokyo, our window looked out onto a trail. Sometimes, when – chocolate in hand – we observed the outside world, we saw super motivated joggers run by, some of them twice our combined age: a regular reminder of how unfit we were. “Running for ten seconds” was, in fact, supposed to be the title of a blog post about how we finally took up running so that no runner would ever be able to mock us again – by simply running past our lazy tail feathers. Of course, the titular ten-second run would never happen (not while we were living in Tokyo, anyway) even though, a few weeks before the duck and I set off on our Japan adventure, we visited our inspirational friend who used to go running every morning. She told us that she loved Haruki Murakami’s memoir What I Talk About When I Talk About Running and recommended we read it, too.

3+ years later, we finally did. And, weirdly, after a life of feeling sick for hours after having had to run for more than ten seconds, reading about the experiences of someone (granted, one who never shared our specific lack-of-running-stamina-problem) who started running regularly as an adult made the duck and me finally attempt to properly take up the practice ourselves (if only we’d read this earlier):

Utter agony, that’s what! This was not our first attempt at trying to learn how to run, but this time around we were more motivated to actually get to a point where we’d be able to run for a half-hour without having to take walk breaks in between. Maybe, deep inside, I was being serious when I wrote that “I wouldn’t be surprised if 2021 turned out to be the year of the zombie apocalypse.” Even if this year does not give birth to zombies, it doesn’t hurt to be prepared.
Whenever the duck and I see someone run for their life or chase a criminal in movies, we are amazed at how strong the human (because let’s face it, there aren’t a lot of tense movies with leading ducks) mind can be;

when I read about someone running away from danger, I find myself thinking that I would probably give up right away. The duck shares my aversion. I doubt we will ever have to run for our lives (I hope; we might have to run after a pickpocket one day, but there’s a reason we’re chronically poor) – this is the fruit of the lazy lifestyle – if there isn’t a zombie apocalypse anytime soon, that is. The duck and I have, however, run to catch the bus or train or plane before, which can count as a life or death situation for our punctuality streak (that we are still very serious about). So, being able to run for a minute or five without spending the whole day recovering sounds pretty good, even without zombies.
So far, we still haven’t graduated to running for more than three

minutes without taking walking breaks in between, but we’ve been running fairly regularly for well over a month now, which is a personal record. After our first disastrous run-walk session that ended the way all our previous running attempts had ended: with us feeling sick and unhappy, we started to pay more attention to breathing properly and to wearing a mask whenever the temperatures are particularly low (it’s great to have found a new use for our array of cloth masks

that we aren’t allowed to wear in shops or public transport anymore). Even though our stamina is still terrible, we at least manage to recover from most of our runs in less than an hour now. Also, running predominantly in the evening, thus being able to experience the golden – and sometimes even the blue – hour, gives us more motivation to keep on running than any person or duck could. Now that it’s warmer out, and we’re not wearing masks anymore, we do get the occasional worried look concerning our stupid grinning faces when we see pretty clouds, a setting sun, or beautiful colors in the sky, but that’s okay. We’re used to being seen as those weirdos 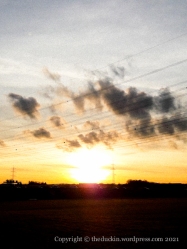 .
Most people wouldn’t call run-walking on a regular basis for a few weeks a success, especially if they saw at what pace we are “running” and how terrible we look and sound after just a few minutes. But to the duck and my lazy butts, it definitely feels that way. And semi-publicly writing about these early stages of trying to learn how to run will hopefully create enough embarrassment to make us at least reconsider before we give up. 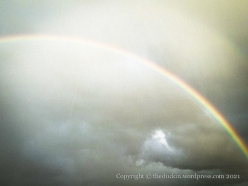 Also, while things like wanting to run a marathon would never give us enough motivation to keep up the practice, the image of us outrunning zombies (maybe one day even the super fast and energetic Train to Busan type) or, in the distant future, passing losers like we are now with our grey hair and feathers fluttering in the wind is pretty powerful.
What about you? Are you as unfit as we are, or are you one of those people who don’t need vivid apocalypse imagery to (pretend to) enjoy a good run? We hope that you’ll have a happy and healthy spring either way!