The duck and I have lived in a few different places. As have nearly all our friends. As a result, we don’t live near most of them these days. Seeing a friend face-to-face once or twice in a decade (if we’re lucky) has become the norm. In the past few years, however, the duck and my laziness has almost entirely squelched our ambition to travel (that, and that other thing). Because of that, we have delayed long overdue in-person get-togethers even more than usual. Fortunately, we can use the internet and snail mail (though our trust in the German postal service has reached a new low) to exchange life updates. Unfortunately, the duck and I are lazy, so it usually takes us months to respond to messages and arrange digital catch-up sessions. We’re lucky to have such understanding friends who don’t judge us too harshly (to our faces) for our intense laziness.
While I function well with little social interaction (past the everyday kind), it’s tough for the duck to have me, a self-proclaimed small-talk adversary, as the only available conversation partner most of the time. That’s why, a few months ago, the duck started striking up conversations with every dog, cat, horse, crow, goose, mouse, and earthworm we encountered on slow jogs or walks around the neighborhood. At first, I was happy the duck had found a way to satisfy those social cravings. However, a few weeks ago, I saw the duck had transitioned to engaging in lengthy one-sided conversations with characters inside the TV.

When I caught the duck composing an affectionate letter to an antagonist in a movie we hadn’t watched together in months, I realized I needed to pay more attention to what entertainment the duck consumes. I can’t have the duck join any fictitious villainous circles now, can I (note to self: revisit 1984 as a negative example)? Who knows what real-world repercussions that could have?! And maybe, just maybe, it’s also time we put away our laziness and do some more traveling so that we can once again catch up with physical friends on couches worldwide. Having had only one of those longer-distance catch-up trips in the past three years is embarrassing, even for someone as naturally reclusive as me. As is having the duck strike up imaginary friendships with not-very-nice people.

Last year, when the duck and I were optimistic and oh-so naive, we decided to share our very achievable New Year’s resolutions. Little did we know that not achieving them in 2020 would have been virtually impossible. Let’s have a look at them, shall we? 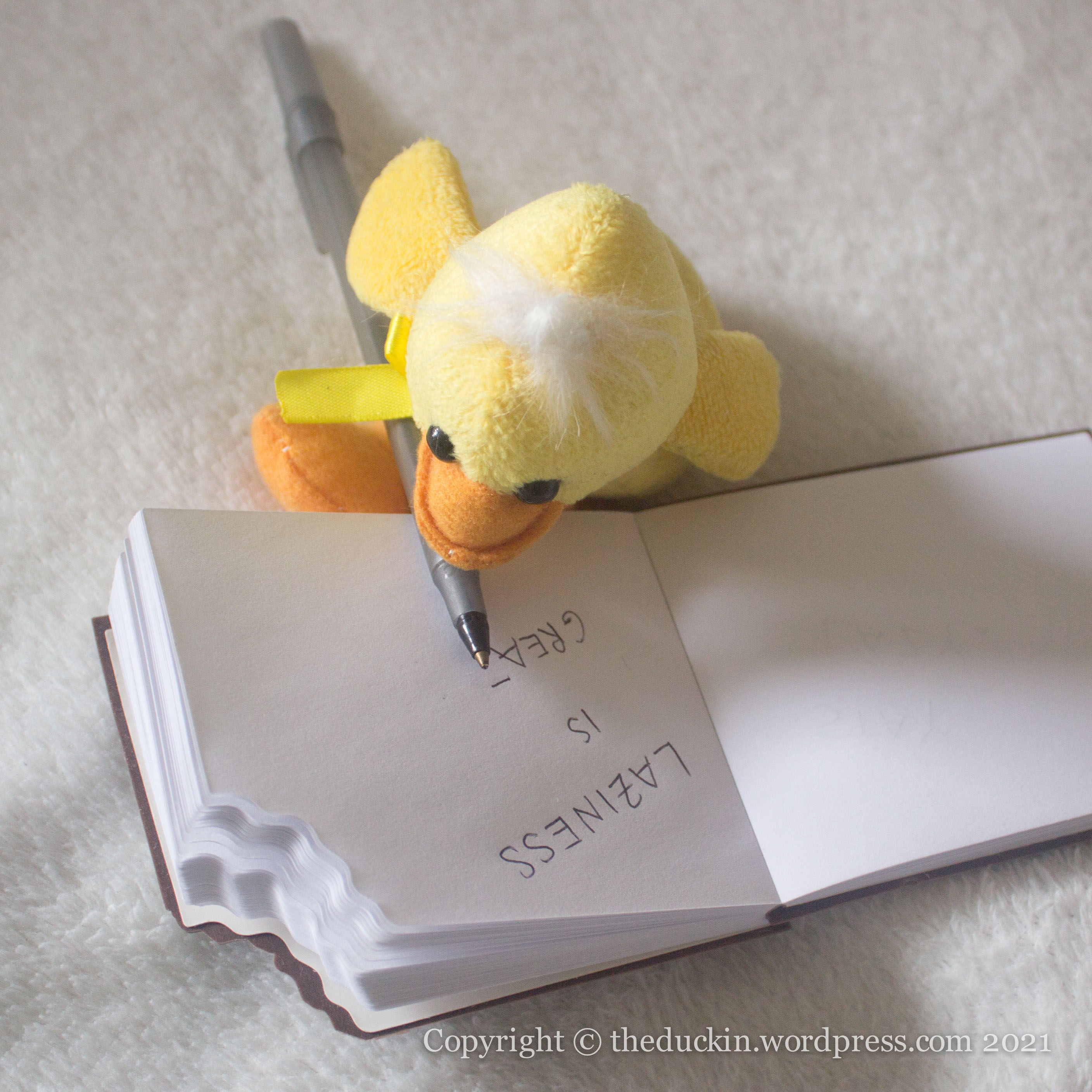 #1: We will NOT get a gym membership. – We didn’t. And that was good considering that public gyms closed down twice last year, and it’s still  undetermined when they will reopen. Maybe we should try to take up running/speed-waddling, though, because I wouldn’t be surprised if 2021 turned out to be the year of the zombie apocalypse. Knowing us, we’ll probably fail, though, like all those other times we tried.
#2: We will keep being stingy. – Apart from a few moments of weakness (for our cheap standards – others might call it regular spending), the duck and I remained as stingy as we’ve always been. With restaurants being closed for a while and us mostly too worried to visit them anyway, we probably spent less money on food than we did in years. We also ate more barely edible food than we have in years.
#3: We will read at least ten books. – We did! In addition to reading Miss Dalloway in a day, we also got to finish several books that our lovely friends had recommended and/or gifted us. In 2020 we bought/received almost as many books as we managed to read so that the amount of books-to-be-read in our bookcase has barely changed. But that gives us plenty more adventures-to-be-had!
#4: We will be true to ourselves. – By that I meant that we would give in to our laziness. And that we definitely did. We did have a few busy months in 2020, but we made sure to sleep a lot during the less busy ones to make up for all that lost laziness.
Weirdly, the duck and I did manage to keep up a somewhat regular posting schedule. I guess there still is a way to increase our laziness. But we might want to save that for another year (or not – we’ll see).

That shall be all for today. Let’s hope that sticking to our resolutions in 2021 will be more challenging than in 2020…
Do you have any new New Year’s resolutions? In any case, the duck and I want to wish you a happy and healthy 2021!

The duck and I had to sleep a bit before we continued our thoughts from last week. But now that we’re somewhat awake (being fully awake is never a state the duck and I find ourselves in, no matter how long we sleep), it’s time to think about New Year’s resolutions some more. See, we actually do believe in the saying that 30 days of doing something forms a habit. That has proven true for us in a few instances. Nowhere do they tell you, though, that it takes just a few hours to break a new habit completely. I don’t even know how many times the duck and I have told ourselves that we should eat healthier (meaning: not snacking on pretzels and chocolate all the time) and exercise a bit more. We have gotten close to meeting this 30 day threshold quite a few times (well, we actually don’t believe that it takes 30 days per se. For us something along the lines of ‘a while’ works). But then a stressful moment came and we just had to buy this bag of pretzels and 15 chocolate bars to go with it. And, weirdly, whenever we get rather serious about exercise we get pretty sick (the last time the duck and I went to the gym on a regular basis for about two weeks I ended up having a 2 months-long cold). This is why our resolutions for this year are so *ahem* easy.

However, there is one (rather useless) habit the duck and I have kept up for far more than 30 days: studying a language every day (we are rather proud of our 1338 day streak on Duolingo that we started on one of those days we were home sick after going to the gym). This is what brought you such gems as: My dog sells hats. I’ll include the video (again) at the end of this post, just because our dog’s story is so inspirational that it needs to be shared, especially in the beginning of the year: END_OF_DOCUMENT_TOKEN_TO_BE_REPLACED

It’s 2020! Wow! I hope that you got to celebrate the start of a new decade adequately. The duck and I did, with Netflix and some fried tofu we made (that tasted surprisingly decent for once). These first few days of January are usually the time everyone writes down their New Year’s resolutions. To be honest, I’m not a fan of those. That probably has to do with my being overly ambitions when I was younger and didn’t know the duck yet: learn the piano, master Russian, become an Olympic fencer, read 10 books, eliminate world hunger. At that time that seemed totally feasible. A few months in, however, I had to realize that there’s no way I can master a language that I barely speak and that in order to learn an instrument or become a top (or even decent) athlete, I would have to practice pretty much day and night. I was lazy back then, like the duck and I are now. That is why, instead of coming up with an extensive list of ridiculous New Year’s resolutions, the duck and I decided that:
1: We will NOT get a gym membership (very doable)
2: We will keep being stingy (it’s fun, you guys!)
3: We will read 10 books (at least. This is the one realistic resolution we had in the past)
4: We will be true to ourselves. This is the resolution we already started to implement last month when we changed the tagline of this blog from ‘Adventures of the traveling duck’ to ‘Adventures of the lazy duck’. We just had to put an end to this false advertising.

The duck and I are positive that, this year, we will be able to stick to our resolutions! Since being lazy also means that we shouldn’t write so much so early in the year (and also not in the first week of the year, never in the first week!), the duck and I have decided to continue this post some other time.

We wish you all a great and healthy new year!

I know it’s hard to tell by all those super personal blog entries attesting to our vigor and diligence, but, surprisingly, the duck and l are indeed pretty lazy (say whaaat?!). Once our all-encompassing laziness is joined by a slight feeling of hunger the duck and I are a lost cause. Let me correct that: we were a lost cause until we found our new recipe for ultimate laziness: furikake, a.k.a. the perfect seasoning for your favorite kind of rice (or other non-sprinkle-resistant food). 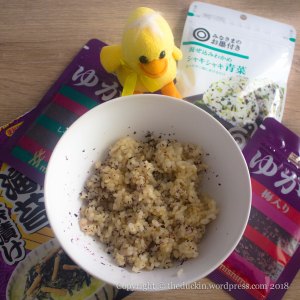 Those little magical packages were our savior for those evenings when we just couldn’t be bothered to prepare something to eat that took longer than five minutes (and we didn’t feel particularly fussy about eating just rice for dinner). Since almost all furnished Japanese places come with a rice cooker – those nifty blocks of grain-transformative wizardry – this is one of the easiest foods you can possibly prepare if you’re lazy like us… provided, of course, that, from a previous bout of non-laziness, you still have a portion of cooked rice in the freezer that you can pop in the microwave for a few minutes (I can’t believe the duck and I didn’t know the cling film trick before coming to Japan: if you cook a big portion of rice, let it cool, portion it out, wrap those portions with heat- and cold-resistant cling film and finally store them in a freezer bag inside your freezer; you can live a life of ultimate laziness afterward – and your rice doesn’t lose any moisture when you reheat it). Add some of the rice seasoning of your choosing (the duck and I love plum flavor) and voilà: you have a lazy dinner to complement your lazy evening.
So, why are we telling you this? Well, if you ever see any of those little packets of seasoning in your local supermarket or Asian grocery store, give them a try 😉

This shall be the end of our lazy post about how our lazy selves make lazy food.